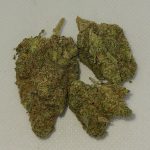 This relatively upbeat strain is an inbred descendant of native South African sativas, though it also has some Indica genes (65:35 Sativa/Indica ratio). THC levels vary, as they do with any strain, but available data suggests they’re not especially high, at least not on average. CBD levels are sometimes high, especially for a strain that appeals to recreational uses. Even so, it varies and isn’t generally high enough to suggest Power Plant as a treatment for seizures or other conditions that can be treated with CBD. Instead, it’s good for anxiety and depression, fatigue, ADHD, inflammation, migraine headaches, and lack of appetite. Use this strain for early afternoons or, if you wake and bake, mornings, as it provides a clear-headed boost of energy, with a creative spark and happy euphoria. Power Plant has a sweet taste with earthy, woody flavors. The aroma is similarly sweet, earthy, and woody. The bud is light green with light brown flecks and a silvery dusting of trichomes. Red eyes and cottonmouth are both common side effects, while paranoia and mild headaches are also possible for some users. This isn’t the world’s most popular strain, but it’s found in a surprising number of legal markets, both in the American West and in Europe

Be the first to review “Power Plant (Gram)” Cancel reply